If you like Pride and Prejudice you’ll want to pick up Gaskell’s Wives and Daughters. 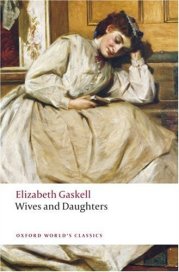 Young women coming of age in an English village, the suspense of an impossible love attraction and comically shallow relations and neighbours combine for an endearing, absorbing read. Gaskell’s writing exudes subtle wit and irony reminiscent of Austen (which I’ve yet to find in a contemporary novel, though Austen fan fiction writers try their best). At seven hundred pages, however, this hefty book covers more ground than Austen novels do, including the topic of death, which never makes an appearance in Austen.

Gaskell contrasts the goodness of sensible, likeable and honest Molly with her charming but deceptive and superficial stepsister. Molly is a heroine who beams alongside the flawed (although fascinating) and manipulative Cynthia, although mostly to the reader alone; the other characters are sometimes blinded by Cynthia’s beauty and wit and fail to see honest Molly’s goodness and integrity, which “does what is right even when no one is looking,” to quote a popular phrase. But morality wins in the end, and Molly’s persevering goodness sees its just reward.