“God’s love is not founded upon any merit – it rests only upon being and need.” -George MacDonald 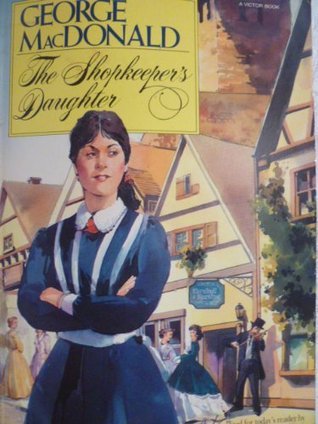 The Shopkeeper’s Daughter is another abridged work by George MacDonald, edited and republished by Elizabeth Guignard Hamilton. Like in The Fisherman’s Lady, MacDonald presents the reader with the ideal Christian, only this time in the form of a lady, Mary Marston.

Most of the other characters in The Shopkeeper’s Daughter hardly know how to understand or categorize Mary, a Christian woman devoted wholly to the will and work of the Lord, who submits cheerfully to the tasks of her low station as shopkeeper and lady’s maid and yet disregards the importance and value of class.  Her willingness to accept work without pay and to lend aid to anyone she can is viewed with suspicion by those who do not care about or believe in God. Most – excepting Jasper Joseph, another individual seeking humbly to follow Christ’s footsteps, who recognizes Mary’s Christly virtue immediately – assume her to have selfish motives, because they themselves cannot conceive of any other kind of life.

True, Mary’s character is not the most developed and her saintliness is perhaps too perfect, apart from a weak struggle with temper she overcomes early in the novel. The Shopkeeper’s Daughter does not achieve the depth and interest of The Fisherman’s Lady, but it offers a light, interesting read nonetheless. It is mostly worth reading for the sake of, firstly, tracing the origins of C. S. Lewis’ thoughts, and, secondly, for encountering beautiful expressions of truth such as follow below.

“But what is love and loss and even defilement, what are pains and hopes and disappointments, what sorrow and death and all the ills that our flesh is heir to, but means to this very end, to this waking of the soul to seek the home of our being – the life eternal?”

“On the contrary, He is the only Man who is no exception. We are the exceptions. Don’t you see? He is the very One we must all come to be like, or perish!“

“She knew there is no bond so strong, so close or so lasting as the truth. In God alone, who is the truth, can creatures meet.“

Read a review of George MacDonald’s Phantastes, a totally different kind of novel.

Other books about the ideal Victorian lady:

Fruits of the Spirit in Agnes Grey

The Heir of Redclyffe by Charlotte M. Yonge

North and South by Elizabeth Gaskell

Prejudice and Suffering in North and South

“If God be light, then death itself must be full of splendor – a splendor probably too keen for our eyes to receive.” – George MacDonald

I typically avoid abridged books (condensed, edited or simplified versions of classic literature) because too much of what makes a classic enjoyable in the first place is removed – eloquent writing, beautiful imagery, profound metaphors. Plot alone does not make a classic; as every good writer knows, all the elements of literature – plot, character, setting, theme, figurative language – work together to produce a harmonizing work of art. Reading an abridged classic is akin to plunking out the melody of the Hallelujah chorus on the piano with one finger. The effect is just not the same.

Unfortunately, some classics contain archaic language, the unfamiliarity of which renders them more or less inaccessible to today’s reader. (As a side note, even university students rely on footnotes to understand Shakespeare.) Thus the reason why many Victorian novels have fallen into obscurity. I have even abandoned reading a couple myself for this blog. If a talented writer could carefully and respectfully edit an obscure classic, to make it comprehensible for today’s reader, while still maintaining the original style, charm, and richness, that would be ideal.

Michael Phillips has done this with The Fisherman’s Lady by George MacDonald, originally titled Malcolm and published in 1875. In the original text, the characters speak Scots, making much of the dialogue incomprehensible to modern-day readers (see an example here). Phillips desired to stay as true to MacDonald’s original work as possible, aiming to retain for the 20th century reader (The Fisherman’s Lady was published in 1982) the style, tone, themes and language which first drew him to MacDonald and inspired him to resurrect his works so that others could enjoy them too. The result is a suspenseful gothic tale set in the rustic countryside of Scotland, peopled with a range of noble and evil characters. Some scenes are quite humourous and memorable, and throughout the book you can see foreshadowing of C. S. Lewis’ thoughts in the dialogue and themes (C. S. Lewis said that he never wrote a book in which he did not quote George MacDonald).

Malcolm is the ideal Christian man in The Fisherman’s Lady, the Victorian exemplar of the noble gentleman, a man who strives to be the picture of Christ – always serving others, putting himself last, acting humbly, seeking to please God above all else, no matter the cost to his life or his reputation – in a word, chivalrous (a term that has unfortunately become soured). The Victorian theme of station and class pervades the novel, but it is juxtaposed with Biblical teachings such as wealth being an obstacle for salvation, the equality of the rich and poor in God’s eyes, and God’s prioritizing of the heart rather than the appearance. Pleasing God is Malcolm’s preeminent ambition, and so when he seeks advice from Miss Horn upon being wrongly accused of a wicked act and she says “Who wouldn’t rather be accused of all the sins of the Commandments than to be guilty of one of them?”, Malcolm immediately accedes the truth of this statement and bothers himself little more about the scandalous gossip.

Malcolm also takes the teaching about being obedient and submissive to one’s master very seriously, seeking to honour the Marquis, his employer, even though the Marquis himself does not always act honourably and honestly. Malcolm answers first and foremost to God.  And he shares the truth about Christ and his coming kingdom with others from a variety of places on their spiritual journeys, resulting in rich, interesting theological ideas and questions being parried about between the characters in their conversations. Malcolm is also quite witty and playful in his speech, and that delight combined with the mystery of his birth and the intrigue of the horrific “wizard’s chamber” make this tale a thoroughly enjoyable, unputdownable read, brimming with potential for a great Christian movie, if anyone’s listening.

Read a review of George MacDonald’s Phantastes, a totally different kind of novel.

Other books about the ideal Victorian gentleman:

“I have never concealed the fact that I regarded [George MacDonald] as my master; indeed I fancy I have never written a book in which I did not quote from him.” – C.S. Lewis

The singularity of George MacDonald’s extraordinary novel Phantastes (1858) will have most readers struggling to find comparisons. It is unlike anything I have ever read. If I had to liken it to something, it would be The Narnia Chronicles (interestingly, the first appearance of fairyland in Phantastes manifests itself in a piece of furniture), The Lord of the Rings or Alice in Wonderland (1865); it’s no wonder then, that Lewis and Tolkien were influenced by MacDonald.

What one might call a “fairy tale for grown ups,” Phantastes feels like “escapist” literature in that its unearthly and yet strangely reminiscent atmosphere elicits a sense of nostalgia and longing in the reader. It is a difficult world to leave. The story flows like a dream, but not a postmodern, arbitrary stream of consciousness meant to disorient the reader. On the contrary, the narrative of Phantastes is quite coherent, and written in true 19th-century-English-gentleman spirit. Phantastes is unmistakeably Victorian.

As mentioned, George MacDonald greatly influenced C. S. Lewis, not only in terms of literary genre but regarding his faith as well. C. S. Lewis credits Phantastes with first softening his heart to consider the possibility of the existence of God. MacDonald was a minister of a dissenting chapel in England, and, although Phantastes contains no overt mention of God, themes of faith and sin pervade the narrative, but they are expressed in the context of fairyland. MacDonald also published many sermons, including “The Hope of the Gospel.” His fantasy novels remain the most well-known of his works, however, and contribute to the enormously diverse array of literary genres from the 19th century.