“His eyes filled with tears, [and] the most subduing and healing of all thoughts – that of the great Example – became present to him; the foe was driven back.” – The Heir of Redclyffe

Although you may have never heard of it before, The Heir of Redclyffe (1853) was one of the most popular novels of the Victorian Era. It was Charlotte M. Yonge’s first novel and proved immediately successful. The Heir of Redclyffe, though perhaps a little difficult to get into in the beginning because of its somewhat obscure conversational banter, rewards perseverance with its plot surprises, original characters, and, as with a multitude of Victorian novels, profoundly intelligent narration of human experiences. 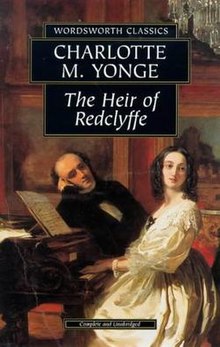 s, a devout Christian family, take under their wing a young, recently orphaned distant relative, Sir Guy Morville. Reared only by a reclusive grandfather with an unscrupulous past, Guy looks to the loving guidance of the Edmonstones, and Mrs. Edmonstone in particular, as they seek to gently direct his spiritual maturation by teaching him self-discipline, particularly of his passionate temper. Romances ensue, drawing lines of loyalty between certain family members, and when suspicious evidence concerning Guy appears and accusations arise against him, the family becomes divided about his innocence and trustworthiness.

The Heir of Redclyffe is a study in sanctification, which is the striving after Christ-likeness this side of heaven. Of course, there are two sides to Christ-likeness: aiming to follow Christ’s example (good deeds), and recognizing where we fail to do so (repentance), and we see both of these elements of Christian sanctification in the novel. The true Christian must reach a state of repentance for his or her sins. With such a theme completely dominating novel, it is not hard to see why the book has fallen out of print and has never been adapted to film, unlike many popular Victorian dramas. Additionally, in the introduction to the Wordsworth Classics edition, the editor herself states that The Heir, with its affirmation of the patriarchal family and the submissive role of women, is definitely not a feminist work. The Heir of Redclyffe probably holds little value for today’s secular reader.

Charlotte M. Yonge was an Anglican, and viewed herself as ‘a sort of instrument for popularising church views.’  She never married, wrote over a hundred works and edited a women’s church magazine for forty years.

6 thoughts on “Introducing “The Heir of Redclyffe” by Charlotte M. Yonge”